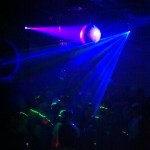 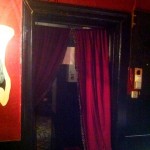 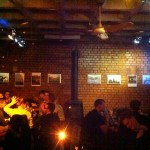 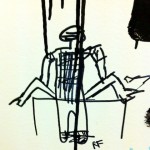 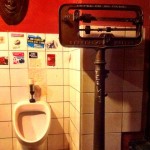 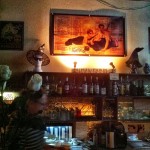 Weddings are romantic and glamourous. The same can’t be said for the Berlin district of Wedding, a pretty rough and tumble working class district, next to hip Mitte, trendy Pberg and residential Pankow. It has been constantly hyped in the media, as the next place ripe for gentrification, but it has yet to happen. Well, not on the surface anyway. The Wedding scene is happening but it’s very underground, which is why Wedding is such a cool place to go out.

Over the last few years, Wedding has been on the radar of students, artists and party hungry avangardists. I love talking to taxi drivers to get the gossip on where are the secret new bars, as well as finding out where they’ve been dropping off and picking up cool customers. Lately, the word on the street is they have more business in Wedding than the bourgeois neighbourhood of Pberg.

So, I set off on a mission to find what was really going on Wedding. First stop was the cool eatery Volta on Brunnenstrasse. Stephan Hentschel, the former chef at Cookies Cream, opened up his own restaurant/bar on the border of Bernauerstrasse, which separates Wedding from Mitte. It’s not a secret anymore, every table is occupied by an interesting crowd who love the creative interpretation of Hentschel’s kitchen, who also plays with some German favourites, breathing new life into them. The drinks are super strong too!

Next, I headed to the area between Gesundbrunnen and Wollankstrasse, where a bunch of alternative Kreuzberg look-a-like bars have popped up. First stop, Fos, a cool bar and lounge, full with gadgets and second hand furniture. At first glance at the drinks menu, I thought I’d travelled 15 years back when a wine glass costed approx. 3 euro. The bar’s most eye catching element is its DIY ceiling. If you don´t have money for professional sound isolation,  use egg cartons! The crowd were laidback in comparisson to Neuköll’s hipsters and expat inhabitants.

There I met a friendly, real Berliner from the ‘hood, who invited me to join him at the next bar. After a vodka shot in the bar Studio8, we walked a couple of blocks and reached the Barrikade bar. My new friend told me that is one of the last remaining squat bars in Berlin (although the squat itself doesn’t exist anymore). There wasn’t a single tourist or expat in sight. The crowd was as authentic as its neighbourhood itself: Turks screaming loudly in front of a football match on the TV screens, cheerful alternative types, Cindy von Marzahn look-a-likes, drunken workers still believing it is happy hour, lost house wives from Moabit and anti fascists planning their next coup.

After a longer conversation about GDR with a talkative woman, I said goodbye to my friend and headed north of Bornholmer Brücke, to the rough Soldinerkiez. Totally off the beaten track is Kugelbahn. When somebody opens a bar in the middle of nowhere and the place is packed with hip, sexy, chilled, mixed people of all ages, you know it’s already a success story.

It’s a retro lounge, cool bar, and event space. This is the tipping point of a new scene that is heading north of Berlin, as well as south. After a couple of nasty drinks, flirting with the bar man, it was time for some clubbing. The most famous club in Wedding is Stadtbad Wedding but instead I decided to visit Humboldthain under the station of S-Bahn with the same name. Inside were banging techno music, psychedelic lighting, smoke, loud party freaks and energetic youngsters. In the summer time, they offer after hours clubbing in garden.

Wedding has an emerging new bar/club scene that is so authentic and laid back, it makes you want to return. See you there next weekend.

Here’s some other places to check out in Wedding