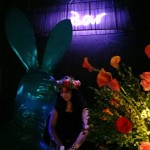 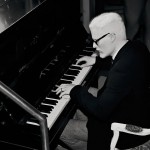 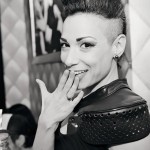 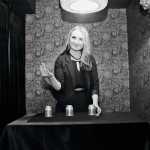 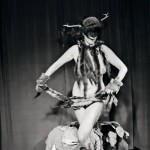 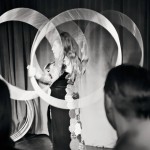 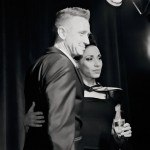 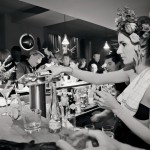 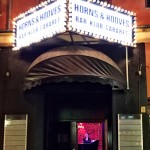 A man in a compellingly tight blue bunny costume, a woman sitting in a bath tub who looks like she just broke out of the Moulin Rouge and a whole crowd of unrestrained strange looking people armed with generously filled champagne glasses see themselves confronted with an ochestra of the senses…what does that get you? One thing for sure. A whole lot of fun.

Last month saw the opening of the brand new venue Horns & Hooves in Prenzlauer Berg. Eccentric, bizzare and unpredictable – that’s what the folks behind this bar/club are going for and that’s what they’re achieving. The owner is no one less than The Beautiful Jewels who’s known for her unusual habit of swallowing swords and possibly other objects for training purposes. She’s toured through 22 countries and has had a very successful season with Mugler Follies in Paris before returning to the best city in the world. As entrepreneur in the burlesque scene she has opened a legendary, exciting landmark in Berlin’s nightlife scene, which is likely to draw a colourful audience seven days a week.

Her venue is a really promising attempt of breathing some fresh air into the nightlife in Prenzlauer Berg – it’s the ideal place for artists, eccentrics, performers and anyone who doesn’t mind the chance of being chased by a gay rabbit drinking vodka on the rocks all evening. The pre-opening party featured a slightly irritating magic show (just HOW did she know all these things?!), a big-breasted lady jiggling along with more hula hoops than we thought physically possible, an excess supply of champagne and the lively chatter of numerous loose-tongued guests trying to figure out just how those magic tricks worked. Last but not least it delivered the promise of a bright future as a bar. And as a club. And a cabaret. And a circus. And if this still isn’t enough, you can get access to a private magician show for some extra euros. Be prepared for some hocus-pocus. This concept could very well turn out to be great – this is Berlin after all!