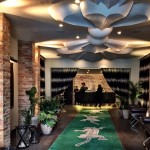 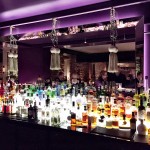 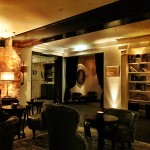 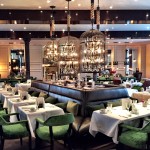 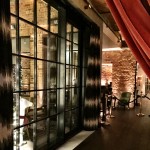 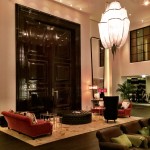 An elegant jade green carpet depicting fearsome leopards leads the way past the floating reception into the holy halls of the newly reopened Hotel Zoo in West Berlin. After finding our way inside we soon realized our wildest hopes would not come true: no playful tigers, no friendly lions, not even baby leopards to pet, except for the ones decorating the carpet. Shame. A friendly receptionist soon made us forget about the lack of baby leopards by enlightening us about the establishment’s remarkable history.

First opened in 1911, it was designed by Alfred Messel, one of the most well-known German architects of his time. The hotel became a huge success in the roaring twenties and fortunately remained largely untouched by the mayhem World War II brought. It became the official VIP Hotel for the Berlinale from 1950 to 1970, drawing the rich and famous to its halls like no other hotel. Romy Schneider, Grace Kelly, Hildegard Knef and Sophia Loren were regulars to the hotel – to name just a few.

After the fall of the Wall in 1989 though, the memory of the hotel’s glamorous past slowly started to fade. Things needed to change if Hotel Zoo was still aiming to be an unique accomodation amongst the many luxurious Hotels Berlin has to offer. These pas   t two years, the building’s interior was stripped down to its core. American star designer Dayna Lee and her design studio Powerstrip Studios entered the jungle of reconstruction and gave the hotel a beautiful new look, inside and outside, bearing in the mind the hotel’s history.

Upon entering the living room right next to the reception, we found ourselves in an airy lobby with custom made leather couches and armchairs, surrounded by large floor-level industrial windows and an open fireplace, creating a somewhat pretentious yet very cozy atmosphere. This atmosphere is gracefully captured throughout the hotel. Even though their 145 rooms are all different from each other in size and character, the underlying pleasant atmosphere will accompany you no matter where you’re headed. All in all Dayna Lee’s take on the interior design is pretty awesome: She managed to infuse the place with a modern touch, all the whilepaying respect to the hotel’s glamorous past. A true artist!

The Grace Bar and the Grace Restaurant were designed by the same makers that brought us the trendy Avenue Club, so expect great parties that are guaranteed to attract a hip crowd. BUT – the bar will has a strict door policy so dress up, folks! The restaurant opens in January and since the hotel’s opening party already felt insane, we’re really looking forward to this one! A little highlight on the side: When you use the elevator to get to the upper levels, you’ll find yourself confronted by a wall of paparrazis. They’re depicted on the elevator’s walls and will start flashing once you start driving upwards, just in case you never get to be on the red carpet yourself.

When leaving the hotel we noticed something funny… a huge door (at least 7 meters in height) with an even bigger door handle (at least anaconda sized) was waiting to be opened in the living room but… it wouldn’t. A loud RAAAWWWRRRR came from the other side. Either Henrik hasn’t been fed for a while or that’s where they keep their feline predators. Meow. For your next Berlin visit, you should definitely consider staying at this top notch hotel, it’s worth every purr! 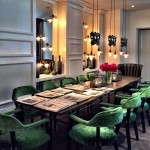 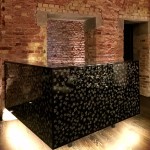 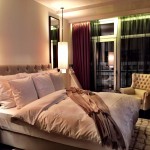 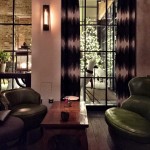 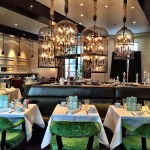 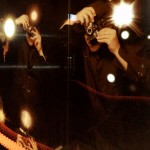