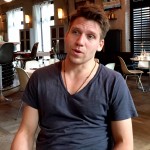 This month’s interview features our favourite German actor, Hanno Koffler. Hanno is known for his amazing performances in movies like Nacht vor Augen (2008), Freier Fall (2013) and his most recent coup Härte (2015). If you only know Hanno from his onscreen appearances, this is your chance to catch up!

Q: Hey Hanno. Congratulations, you just got nominated as Best Actor for the second year in a row! How are you feeling right now?

A: I’m feeling awesome right now. It’s great to have your work appreciated by the business and colleagues, especially since I’m really proud of the work I’ve done in “Härte”. Playing Andreas Marquardt wasn’t an easy role, it was a really special and intense work, so right now I’m just feeling thankful for all the appreciation shown for the movie.

Q: Did you always want to become an actor?

A: Nah, there were a bunch of things I considered doing when I was younger. I always liked the idea of being a craftsman, like a woodworker or maybe even a gardener. Then again I also thought I was going to be a Rockstar for quite some time… which hasn’t worked out so well.

Q: Hanno the Rockstar, wouldn’t that be something. What’s your favourite band?

A: Hmm… tough question. Back in the days it used to be Nirvana, but I really like the Beatles and I’m a big fan of Elvis Presley. Depending on the mood I’m also into Bob Dylan or even Schubert and Mozart… I think I need a pre-made list with answers for questions like this, it’s really difficult to settle for one.

Q: Becoming an actor is a very profound experience – things from deep inside your soul are washed to the surface, things you maybe never knew even existed. What was the most important thing you learned about yourself in the process of becoming an actor?

A: I guess one of the most profound lessons I learned was coming to realize how acting is not about perfection, but rather about accepting your own imperfections and to let them show on the outside. It’s about finding your own truth and building up your own personality. It’s about finding a quiet and true point within yourself from which you can develop into new directions and adapt to new roles. Then there’s body language, controlling your voice and finding the way to your emotionality. It’s also about learning to let everything go.

Q: Did you already find that point?

A: It’s a constant search, really, and I’m not sure if it can ever be wholly found – however the search definitely has made me aware of some of my hurts. Learning how to act is a never-ending process, because it’s a journey to your own personality, which always transforms, grows and changes.

Q: In “Freier Fall” you’re playing the married police officer Mark, who starts a love affair with a homosexual colleague – very much to his own surprise. The film manages to create an incredible atmosphere and intimacy. How do you prepare for a role like that?

A: First of all, by reading the film script. Then it gets trickier: You have to try to understand your character’s world and try to dive into the depths of his mind. Once I feel I have good understanding of my character, I’m giving it all my passion and emotionality to get engaged with the role and just see where things go from there.

Q: So… did “Freier Fall”  reveal a formerly unknown passion for the male sex or was it just fantastically played?

A (laughs): It was just fantastically played.

Q: What about Freier Fall 2? Is it just rumours?

A: I really like the idea, especially since it’s extremely rare for German arthouse movies to have a sequel. We had more than 6 millions views on the trailer just from the US, so the interest for Freier Fall has grown to an international level. We have this huge audience from all over the world and lots of questions that still need to be answered, so getting the funding for a sequel would be great. Max Riemelt and me are definitely up for it if we can take a liking to the script and to achieve that the producers and writers need to raise enough money for developing a great story and for making the whole thing happen. It’s still a long way to go, though and the project needs as much support as it can get – there’ll be a crowdfunding campaign soon, so get involved, everyone!

Q: What was the craziest thing you’ve been through while acting?

A: Well, there’s always the good old house ban. We were in this shabby hotel while filming Freier Fall and had a little get-together after we were halfway through with the shooting. We had a few drinks too many and partied until the early morning… until the hotel had enough and we have to pack our things and get going.

Q: In “Härte” you’re playing Andreas Marquardt – a man who’s been through a life of violence, abuse and hatred. What was it like to play that role?

A: It was extremely intense. Above all it was a very special honour to play Andreas – he’s a very authentic person who’s been through a hell hardly anyone of us can begin to understand.

A: Home. Family. Friends. At the same time it can also be stressful and create a longing for the countryside. It’s a bit of a love hate relationship.

Q: In what ways did you experience the change Berlin has underwent in the past 20 years?

A: At one point I was gone for almost a decade and realized that lots had changed when I came back. Just a few hundred meters from here my band used to jam in a little rehearsal space in some worn down backyard. Now the place boasts a 24 hours supermarket, a health care center and tourists everywhere!

Q: Which night clubs do you go to?

A: We usually party at someone’s flat and put on a quality DJ set to get us grooving through the night. Apart from that – Kater Holzig and Berghain are good choices to have a fun night out.

Q: Can you recommend any restaurants for our readers?

A: My all time favourite is Jules Verne on Schlüterstraße, I’ve been going there for years – there’s no way I ever get tired of their Schnitzel. Not too far from here there’s the Antillo – run by real Italians, they cook some great food aswell.

A: Don’t really have one. I was having a few drinks at Viktoriabar in Schöneberg the other day, that was pretty cool! 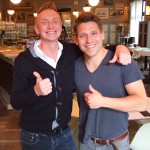 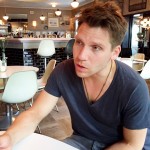 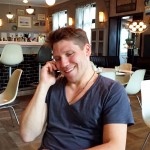 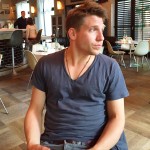