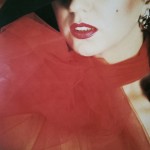 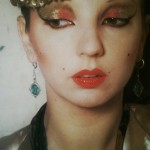 This month’s interviewee is former model, night club owner and make up artist Monika Vögel. She was one of the biggest icons in Berlin in the 1970s and has worked internationally until recently.

Hey Monika. We’re so glad to have you! First off – you’re 70 years old and still radiating with life. What’s your secret?

The secret is: There IS no secret. I’ve always been this old, but younger… which is also the title of my forthcoming book, by the way.

What are you best known for?

I started modelling at 14, ran two night clubs and a student restaurant, I’ve released an album and I’ve worked as self-taught make up artist for many years for TV, movie and big opera productions. People used to say for a joke that I don’t belong to the scene – I am the scene.

You came to Berlin in 1966. The hippie era was just taking off – what did you do then? What was Berlin like?

Berlin was super super super super SUPER! I was really fascinated by the hippie culture and soon became a hippie myself. Sex, drugs and Rock’n’Roll, baby! Well, for me it was sex, love and Rock’n’Roll. I never liked drugs, but in the hippie time, people were crazy for them. Berlin was crazy back then. There was so much freedom, love and joy in the air. I had friends from all over the world from Turks, to Italians to Germans to my neighbour and even to David Bowie. If you think Berlin is crazy today, you should have seen it in the 70s!

In your time as a night-club owner you must have lived through some crazy stuff. What comes to your mind when you think back to that time?

I had this friend, Jean-Claude Baker. He opened a mixed club for heteros and gays in Berlin called „Pimm’s Club“. Since I already had some experience with running a club from my time at Sgt. Peppers, I took over the Pimm’s Club when Jean-Claude left for New York to open the first French cable TV in the USA. There were more scandals at Pimm’s Club than I could tell you about in a lifetime… once a month I did a travestie show with my friends, even playing myself, bunt gemischt mit freunden. It was the best time ever. Once I had to take up a fight with all the street pimps, because I wouldn’t allow them in the club. They lured me outside and formed a circle around me, ready to attack. I told those assholes that I knew all their bosses, and if anyone so much as dared to touch me, they would be dead! I didn’t have trouble with them again after that.

You left Berlin in 1981 and didn’t come back until almost 15 years ago. Where did you and why?

I left for Frankfurt to work as make up artist in TV shows and advertisements. I landed a good job as make up artist for a cinema production from Wien and later met my 4th husband, Tommy, in Wien. After that, I stayed for love. It wasn’t long after that until I found myself confronted with a dog every day… I did make up for more than 200 episodes of Kommissar Rex (Inspector Rex)!

So… did you do the dog’s make up too?

Haha, screw you. I used to say I did his lipstick. Luckily the cast was bigger than just the dog.

You were also good friends with Falco. How did you become friends?

I was hanging at this bar in Wien when some guy approached me and invited me to a glass of champagne. I’m not crazy for drinks, but he was really nice and it was hard to say no. After the barkeeper told him my husband was Tommy, he started laughing. He knew Tommy well and from this point on, we were friends. Tommy did set design for Falco’s videos and I started doing the make up for all of Falco’s videos. One day I met Falco in the city and we talked for the best part of hours without sitting down or even moving. Four weeks later he was dead…

The best die young… well, except for you! You were quite a musician yourself in your time – in 1987 you released your album “Sag ja” (Say yes) and stormed the charts. What was being a musician like?

There was this film scene where my band and me performed 6 songs live in 22 minutes which created a big media echo and my first album did pretty well. (Un)fortunately my band was full of great artists, and of course after they didn’t like the commercial direction it was taking. I would have needed a new band, so I thought: What the hell. I’m done anyway and I need a paying job. That was right before I started with the Kommissar Rex, opera and TV productions.

With so much going on in your life, we can’t help but wonder: What are you working on these days?

I’m collecting input for my memoirs and writing poems. The book will be called „I’ve always been this old, just younger“. Expect to read a lot about the untold scandals from my days… it will be worth the wait.

Thank you for your time, Monika… we can’t wait for your book!