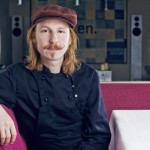 Stephan Hentschel is one of the most celebrated chefs in Berlin right now. He’s best known for his role as kitchen chef in the vegetarian restaurant Cookies Cream (which scored a very decent 14 points in the Gault Millau) , not-so vegetarian Chipps at Gendarmenmarkt and newly opened Crackers on Friedrichstraße. He’s also co-owner of the Volta gastro-pub, famous for their delicious burgers. We immediately liked him.

A: That actually wasn’t up to me. I’m not even a vegetarian. It’s the Cookie Cream’s concept to only serve tasty, vegetarian dishes and I’ve been up for the challenge for the past 7 years. In most restaurants you’ll get your standard rice or pasta dish when you’re inclined to avoid meat, but we’re trying to create vegetarian meals that are somewhat out of the ordinary. If you’re a meatlover, though, swing by at Chipps, Volta or our newly opened restaurant Crackers and you’ll find what you’re looking for.

Q: What’s new about the Crackers?

A: The Crackers is located right below the Cookies Cream, so obviously we went for a different concept there. While the Cookies Cream is about fine dining, the Crackers provides a cozy, leaned back living room atmosphere, where you can just hang out with friends, have some food and enjoy a few drinks while you’re at it. It’s basically just one really spacey room that you enter through the kitchen, a mix between bar, lounge and restaurant. There’s DJ nights on tuesday, thursday and friday nights in the same halls that were once home to the Cookies… it’s not as dead as you might think.

Q: Did you always dream of becoming a chef?

A: I didn’t even know I wanted to cook in the first place! I originally started working on a construction site, but reality hit me pretty soon. Getting up early, all the while in the cold outside and just a few poorly made sandwiches for the day weren’t really my thing. At all. After that I did a traineeship at a 5 star hotel’s kitchen and realized I wanted to become a chef rather than a construction worker.

Q: Berlin wasn’t really buzzing on the culinary radar of Europe’s cities for a pretty long time. Why do you think that changed over the last years?

A: When I came to Berlin after finishing my training in 2001, there was about a handful of decent restaurants in the city. I think that transformation was due to Berlin drawing young and creative people from all over the world, more than a few of them being chefs. They came here to enjoy life, live their dreams and of course, go partying. The working hours in hotels don’t really fit these ambitions, so many of them took up jobs in restaurants, which eventually led to an increased creative quality on the menues. On the other hand there’s that great supply of organic food we’re getting now, the groceries come straight from the farmers to our restaurants. That led to a big increase of the food’s quality.

Q: Even though you’re still pretty young (33), you’re celebrated as Berlin’s next master chef and the culinary world craves for you creations. How do you handle the hype?

A: To be honest, the hype doesn’t really mean that much to me. I’m just glad I get to cook at my own restaurants and they’re going well, what more could I ask for? Sometimes people ask me if I didn’t want to have a Michelin star, but honestly, I don’t. We’re almost always booked up and having a Michelin star would just mean less guests.

Q: Less guests? I should have thought more guests!

A: Our costumers are a cool, leaned back crowd that come here because they feel we’re still down to earth and carry some of that urban Berlin flair. I feel the same way and don’t care for a star and I think neither do our costumers. Of course, there’s a few Michelin star chefs who are doing a great job at marketing and manage to create their own brand, anyway. In the end, I think the Cookies Cream is one of the top notch restaurants in Berlin, star or not.

Q: Agreed! Is there a dish you can’t stand?

A: I’m really not into food that’s still moving when it’s served. Or blue mold cheese.

Q: Where do you find our inspiration?

A: I just have a look at the groceries, really. There’s about 12 different farmers that I regularly visit and we’re talking through what can be planted or harvested soon and then I just kind of go from there. But my personal favourite is the classic french cuisine. I’m a bit of a potato-boy.

Q: The Cookies Cream is located right above the former Club Cookie. Did you often encounter party zombies that would swing by after dancing a whole night through, seeking to refill their vitamin tanks?

A: Nah, they mostly swung by in the evening, before they became party zombies. Our light fares are a solid choice for a pre-party meal. Lots of vitamins and easy on the stomach, gets you through the night every time. The next morning people are more inclined to pay their tributes to the Chipps, where they can get hearty English meals to deal with the hang over.

A: I used to be a real Berghain-kiddo. Even back then, when it was still called Ostgut. I’m a huge fan of electronic music and I’m really into techno and house parties. You’d often find me at Kater Holzig, about:blank or sometimes the Watergate. Then there’s that great underground techno party culture you’ll only find in Berlin… not always strictly legal, but guaranteed to blow your mind away.

Q: Which other restaurants can you recommend? Apart from yours, obviously.

A: I like to hang out in the Prater Biergarten on sunny days and have some classic Schnitzel along with a cool beer. Hard to beat! Other than that, there’s the Cocolo Ramen on the Gipsstraße, definitely worth a visit.

Alright! Thanks for taking the time, Stephan, we’ll see you soon!