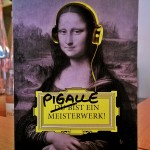 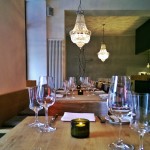 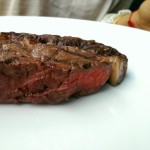 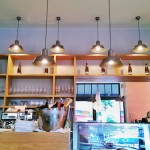 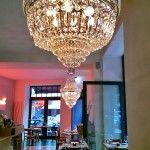 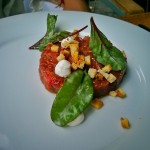 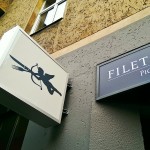 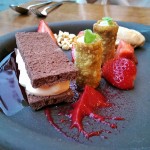 The magic formula to turn vegetarians back into meat-lovers has been found. No kidding. It goes like this: π + gal + le, and uhm… okay. We lied. It’s not actually a formula. It’s a restaurant – which is great for people like us who prefer meat over math.

Pigalle is the third and yet largest addition to the popular Filetstück restaurants (translates to “filet piece”). It’s located in a former brothel in Neukölln whose name they inherited and we’re glad they aren’t breaking tradition. The place still pleases the desire for meat – but with more taste. Do not be irritated by the painting on the wall depicting a man seperated into the parts relevant for butchers. We investigated a little and to our relief we found out the chef’s name is NOT Hannibal Lector.

For starters we enjoyed the distinctive Pigalle snack –  black pudding served with a vodka shot, to be had for as little as 5€. The meat stems from the same supplier that also supplies the court of the Queen of England, but pshhht… don’t tell anyone in Neukölln… some people here are still allergic to luxury. The main course really spoiled us: Dry-aged meat so tender the first bite completely erased our memory of vegetables for a minute. Apparently we weren’t the first ones: Filetstück’s story began as a little eatery in hipsterhood Prenzlauer Berg, where their meaty snacks created a cult among people who usually insist on not getting within a 5m radius of anything meaty. Now they’re regulars.

The restaurant’s inside feels very straight and honest, allowing the focus to be where it should be – on the food. You can get your steak either as a filet or entrecôte and honestly, they both were so juicy, we kept dreaming about it for a week. The sides aren’t bad at all, but after tasting the spectacular meat it feels like they’re a bit behind. All in all Pigalle is an absolute must-visit for anyone who enjoys quality meat in an authentic atmosphere off the usual main drag steakhouses in Mitte. We will be back!