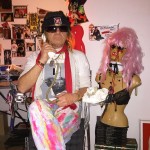 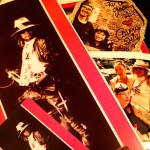 Be aware, folks, this month’s interview definitely is the craziest one we’ve done yet. Nothing for the faint-hearted, either. This story’s protagonist has worked on more than 300 films and once planted a bomb in a Paris hotel room. It went off. This interview will take you on a ride – an exclusive behind the scenes ride into a real treasure cave of the Berlin art scene.

It all began at a busy intersection in Berlin Kreuzberg (Kreuzberg = Xberg). Freezing our butts off in the typical Berlin cold of the winter, we were waiting to be picked up by our very special interview partner of the month. All we knew was when and where to wait. No address, no names, strictly anonymous. He usually doesn’t invite guests into his atelier and he usually doesn’t give interviews, either, but somehow we managed to get a hold of him. Don’t ask how.

And then, there he was. Lagerfeld von Xberg. We walked over to his side of the street and were greeted by a broad smile. It wasn’t quite enough to distract from the colourful jeans (self painted), the distinctive hair cut or several scarves loosely tingling from his neck, all in different colours. The friendly wrinkles around his eyes seemed timeless, and though well beyond 60 years, the sparkle in his eyes still burned with energy and curiosity. Eagerly we followed him through the depths of several Kreuzberg backyards, slowly loosing orientation – night comes early in Berlin this time of the year and we found ourselves surrounded by a wall of grey slab buildings.

If what happened so far felt out of place, we were in for way more than that. We entered his flat. Immediately our brains started putting up a protest against the sudden visual impact the blur of colours had on us. The walls and floor plastered with collages of naked women, dressed women, graffitis, paintings, tags, posters, plaster figures. In the middle of the room ten partly molten barbies dangle down from the ceiling, body parts sticking in all directions. The upper body of a plaster figure next to us obviously required a caesarean section, the head of a barbie doll sticking out of its bloody belly. The life sized plaster bear at the opposing wall seems to be waiting. To start pissing in a bucket located right under his crotch. What was all this? It was time to start asking questions, but… where to begin?

Q: Hey Lagerfeld. Who are you and… what is it you’re doing here?

That much was obvious. His shirt depicted a woman with a mask on, pulling down her shirt that said “Chantal” in the direction of her bare vagina. Lovely.

Q: Right. And why do you call yourself “Lagerfeld”?

A: I once worked for Karl Lagerfeld and I think he really is a great, inspiring person. An idol of human nature. But me, I never chose to be Lagerfeld. Apparently I talk a lot like him. I mumble a little, so folks started calling me Lagerfeld. I also really liked Dennis Hopper. He had that aura of greatness and was a great guy to work with, very professional.

Q: I see. So how did all this begin? What are your roots?

A: When I was 7, a military doctor removed my tonsils by force. He tore them out, no anaesthesia. When I was 10, I was put in a nunnery with deaf and retarded children… the problem was, I was neither. I spent 10 years there, involuntarily. After I survived that, I became a window shop decorator for the KaDeWe.

Henrik and me shot ourselves careful sight glances. That was some heavy stuff. But it didn’t explain how he ended up here, or how he had done 300 films, or destroyed a hotel room in Paris.

Q: So how did you end up in the film making business?

A: There once was this group of film makers sitting next to me in a restaurant. They talked about some issues they had with the special effects and pyrotechnics for their movie, so I offered help. Next thing I know, I’m working on the requisites for a movie by Fred van der Kooij. After the movie was released, Studio Babelsberg called me and asked if I wanted to do the special effects for a big cinema production they were making. But there was a requirement. They asked me: “Have you ever done cinematic movies before?”. So I replied “Hell yes I have”.

Q: But that was a lie, it was only your second movie!

A: Of course it was. I never actually said I was pyrotechnist either, they just thought so. Technically I was always very close to hearing the prison door slam shut behind me, but things never went wrong.

Q: Luckily! Like that one time, when you set off a bomb in a Paris hotel room. What was that all about?

A: I received a call, asking if I could detonate a hotel room in Paris. Hotel Marceau was planning to renovate their premises and they came up with the idea to allow several artists to reshape the interior of the rooms and create something unique before starting the renovations. Nah, I said, that’s a little over my head. I mean, come on. Then Gregor Hildebrandt came up to me – he was one of the artists given a room to express his vision – and had me convinced I was the only person for this job. So… I built a bomb. And took it to Paris.

Q: Jesus. Did you inform the authorities that you built a bomb for an art project?

A: Well… I meant to, really. But somehow that didn’t work out, so I smuggled the bomb to Paris on a train. The authorities in Paris never knew there was going to be an explosion, so I made my escape right after it went off. Just to make sure I wouldn’t be arrested.

Q: Good thinking. So… what are all those barbie dolls doing here?

A: They were requisites for a movie we made. My daughters handed me their old dolls and I decapitated them, melted them and tore them apart. For the movie of course. Went okay, they don’t scream, don’t mind anyway and never once complained.

Q: So you didn’t do that because you think that Barbies are bitches or something, right?

At first we thought it was all a little (read: very) astonishing, but listening to this old jolly soul tell his story, all the while with an amused twinkle in his eyes, you couldn’t help it but to like this guy.

Q: Do you have a few tips for going out in Berlin?

A: I’ve never been much of a clubber. Last party I went to was the Berlinagenten anniversary party, but that was an exception. Do you like coffee, though? Every day I have one at my favourite Italian restaurant, Il Casolare or the Bistro Bar Bateau Ivre, an artists’ coffee bar at Heinrich Heine Platz. They’re very good and all know me by name. The owner’s name is Lauren.

Q: Thanks for the tips. What are your hopes for the future?

A: In my heart I always felt I really was a woman, so I’m looking to have an operation soon, where I get my… well, they’re going to cut something off. I know I’m 64, but I’m starting a new life now. I’m also working on my own project now, a movie about my fate. It’s still top secret, but you’ll like it.

Thank you, Lagerfeld von Xberg, I’m sure we will. We’re glad to have you around. Stay as you are! 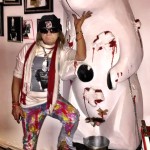 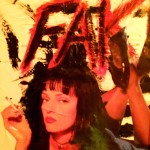 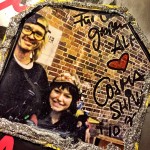 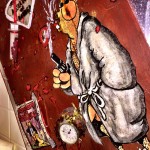 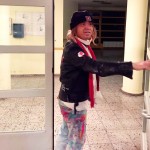 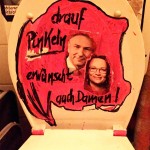 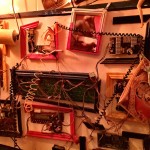 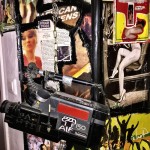 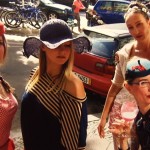